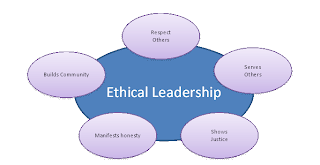 1. Ethical leaders respect others
o Immanuel Kant argues that it is our duty to treat others with respect. One should treat others as ends in itself and never as means to an end.
o Beauchamp and Bowie (1988) pointed out that "Persons must be treated as having their autonomously established goals and must never be treated purely as the means to another person's goals."
o Leaders who respect also allow others to be themselves. They approach others with a sense of unconditional worth and value individual differences (Kitchener, 1984)
o Respect means giving credence to others' ideas and confirming them as human beings.
o A leader should nurture followers in becoming aware of their own needs, values, and purposes.
o Respect means that a leader listens closely to their subordinates, is empathetic, and tolerant to opposing views.
o When a leader exhibits respect, subordinates feel competent about their work.
2. Ethical leaders serve others
o This is based on the concern for others (Ethical egoism)
o This is an example of altruism.
o An example of this is observed in mentoring, empowerment, behaviors, and team building.
o Very similar concept to the "Beneficence" that is taught to health professionals.
o Senge contended that one of the important tasks of leaders in learning organizations is to be a steward (servant) of the vision within the organization and highlights the importance of not being self-centered, but integrating one's self or vision with the vision of the organization.
3. Ethical leaders are Just
o Justice demands that leaders place the issue of just at the center of their decision making.
o No one should be treated differently unless their particular situation demands it and if that is the case, then the rules for differential treatment should be made clear.
o Good coaches are those who never have favorites and those who make a point of playing everyone in the team.
o The golden rule (Rawls, 1971) is to "Do unto others as you would have them do unto you."
o The principles of distributive justice includes:
i. To each person, and equal share.
ii. According to individual needs
iii. According to that person's rights
iv. According to individual efforts
v. According to societal contribution
vi. According to merit.
4. Ethical leaders are honest
o Being honest is not just about telling the truth. It has to do with being open with others, representing reality as fully and a completely as possible.
o There are times of course where telling the complete truth can be destructive and counter productive. The challenge is to strike a balance.
o It is important for leaders to be authentic, but sensitive to the attitudes And feelings of others.
o Dala Costa (1998) made a point in the Ethical Imperative book. "Do not promise what you can't deliver, do not misrepresent, do not hide behind spin-doctored evasions, do not suppress obligations, do not evade accountability, do not accept the 'survival of the fittest' pressures"
5. Ethical leaders build community
o Leadership is often defined as the "process of influencing others to reach a common or communal goal." This definition has a clear ethical dimension. The common goal implies that leaders and followers agree on the directions of the group.
o Authentic transformation means that a leader cannot impose their will on other. They need to search for goals that are compatible with everyone.
o Ethical leadership demands attention to civic virtue (Rost, 1991). This means that both leaders and followers need to attend to community goals and not just their mutually determined goals.

Maybe the most important thing is to realize that leadership involves values; one cannot be a leader
without being aware of and concerned about one’s own values. We can say also that rather than
telling people what to do, we should tell them what to be and help them to become more virtuous.
When practiced over time good values become habitual and a part of the persons themselves.

Strengths
o It provides some direction in how to think about ethical leadership and how to practice it.
o It reminds us that leadership is a moral process. Other than the transformational theory of Burns, no other theory considered or highlighted ethics.
o It describes some basic principles that we can use in developing real-world ethical leadership. These ethics have bee present for over 2000 years.

Weaknesses
o It is still in an early stage of development. It lacks a strong body of traditional research.
o This area of research relies on the writing of a few individuals, whose work has been primarily descriptive and anecdotal.

Leadership instrument
Craig and Gustafson (1998) developed the Perceived Leader Integrity Scale (PLIS). It is based on the Utilitarian ethical theory. It evaluates leaders' ethics by measuring the degree to which subordinates see them as acting in ways that produce the greatest good for the greatest number of people.
Posted by Hazem Abolrous at 8:43 PM